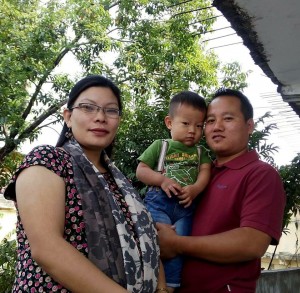 The kingdom of Bhutan is an Asian country situated on the far east of the Himalayas, bordering with China and India, and has a population of 700.000 inhabitants. Its official state religion is Buddhist so Christians are persecuted. Until 2007, there were not any Christian missionaries in this country. In 2006, Senti, a young Christian from a neighboring country, heard the call of God to work as a missionary. He prayed several years so that God would open a door for him to go and evangelize Bhutan. After finishing his theological studies, he met a young Bhutanese Christian girl with whom he married in 2012. In order to get into the Bhutanese kingdom, any visitor has to pay a visa fee of 200 USA per day. But God worked wonderfully and because of their marriage, Senti received the legal right to stay in Bhutan without paying any visa fee. His wife, Dema, is involved in a Bible translation project in the Tshangla language, Bhutan`s most spoken language. They share the Gospel to young people using classes of music and sports. Holy Fire Ministries Organization is financially sustaining this missionary family since early 2014.